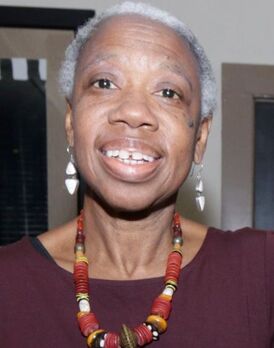 Lorraine is a performance artist of many talents

Under  “The Wisdomkeeper”, the name of her performance company,
Lorraine brings to life historic and heroic African American women,
such as Sojourner Truth and Harriet Tubman in periodic costume.

As a Performance Poet, Lorraine presents the works of such
African American poets as James Weldon Johnson,
Paul Laurence Dunbar and Langston Hughes.

She brings these and others to life in schools, libraries,
churches and historical societies.
These presentations open up new pathways for exploring history,
literature and social studies.

Lorraine defines her role as a Historical Interpreter because she becomes that character.
She dresses like the character from that particular time period and weaves their story to
the audience from birth to death. She engages the audience through every phase of their life.
The audience will be right there to laugh, cry, sigh, and cheer as the character unfolds
right in front of their eyes. The performances are usually 35 minutes to 1 hour long.
There is always room for questions at the end.

She has become quite a history hound and historian researching information
for her historical interpretations.

Lorraine is a native of Asbury Park, N.J, currently residing in Eatontown.

Lorraine got her start on stage as a child at the Bethel A.M.E. Church in
Asbury Park, reciting poetry for church functions.
By 16 she was on her way to becoming a “Performance Poet, performing
at many local churches.

Those early days laid the groundwork for the creation of her
one-woman show, “Words, Rhythms and Love, first
presented in Asbury Park, in 1998. She has been featured in
many productions of the Dunbar Repertory Company,
including her role as Bessie Delany in
“Having Our Say;the Delany Sisters First 100 Years and Lena Younger, in
“A Raisin in the Sun. She also appeared in
Pearl Cleage's,  “Song for Coretta and “Black Nativity”, both Dunbar Productions.

Her first play, “Mama Zuri” was presented as a staged
reading at the Brookdale Community College 2010 Juneteenth Festival.
It was also a selection of” Playwrights on the Rise” at the
Strand Theatre in Lakewood. NJ.

Lorraine holds a B.A. in Communications Arts and Sciences and has worked as a
newspaper and television journalist as well as director of Trinity School for the Arts at
Trinity Episcopal Church in Asbury Park.

Lorraine is a member of M'Zume Carnaval, a percussion ensemble presenting carnival
rhythms from  Brazil, Africa and Cuba.

She is also a member of Core of Fire, an interfaith dance ministry of mature women, who
use the healing power of dance to combine spiritual connection and creative movement
into choreography that speaks to one’s deepest longings to express the awe, wonder and anguish of
the life experience.

Lorraine is an active member and on the board of directors
of the T. Thomas Fortune Cultural Center & Foundation

Disclaimer: This website was created and
​is administered by Lynn Humphrey
BizEturtle
Powered by